A Cheat Sheet for the Alphabet Soup of Engineering Acronyms

Speaking as an outsider, engineers sure do love acronyms!

It’s understandable. Engineers are trying to communicate technical properties, readings, performance statistics, or testing results, and you want to get right to the numbers and not have to keep repeating phrases like Maximum Allowable Working Pressure – so you revert to the acronym MAWP. Message understood. Time Saved.

That is, assuming that the person on the other end of the communication also speaks the same language and dialect of acronym. Acronyms can be tricky, that way.

Does RBI stand for Risk-Based Inspection or Runs Batted In (or Reserve Bank of India)?

NDE is Non-Destructive Evaluation and everyone knows that. Except for the people who believe it stands for Non Drive End, Network Design Engineer, or Near Death Experience (gasp!).

Fortunately, RAGAGEP only stands for Recognized and Generally Accepted Good Engineering Practice. But it takes almost as long to say the acronym than it does the whole phrase.

We Live in a World of Acronyms

The website Acronym Finder has more than 5,000,000 acronyms and abbreviations. Which shouldn’t be surprising because acronyms have been part of our lives for literally centuries.

The ancient Roman legions marched under a banner with the acronym SPQR – Senatus Populusque Quiritium Romanus – The Senate and the People of Rome. (Today it stands for System for Pattern Query and Recognition, unless you’re speaking in Latin to someone.)

Acronyms can be especially helpful in branding. As they evolved into a technology systems enterprise, the Computing-Tabulating-Recording Company, founded in 1911, decided to change its name to International Business Machines. And when it became too cumbersome to say all that, they simply became IBM (in 1924).

UPS is easier to remember than United Parcel Service. NBC, ABC and CBS are easier to recall other than what the heck the C stands for in CBS (it stands for Columbia Broadcasting System).

And, of course, virtually every branch, sub-branch, twig, or leaf of our government goes by its sometimes intuitive, sometimes unintelligible set of initials. FBI, IRS, CIA, FCC, NASA just roll off the tongue without your having to think about them. But then can you get into the weeds and never find our way out again, especially with the military.

This, on the other hand, is something somebody made up and that’s just for fun:

Are We All Speaking the Same Acronymic Language?

As long as you stay within the realm of your particular industry and sub-specialty, you can probably communicate effectively using acronyms. So, if you’re all working on an NII strategy using NDE tools such as RUG and PAUT, there’s a good chance everyone you’re working with will  know what the heck you’re talking about.

But, if you’ve just come across from another industrial environment – going from pharmaceutical process controls to chemical processing safety management, you might think everyone is speaking Farsi. At least at first.

So, here’s a handy Cheat Sheet for acronyms that you should probably know in the world of oil & gas, specialty chemicals, and other process-specific types of inspection. Print it out. Laminate it. Have it printed on your coffee cup. Refer to it as needed, but don’t make it too obvious because then everyone will want one.

This is by no means an authoritative or complete list. But it’s a good start.

It’s like learning any new language. Start with a few simple phrases like “Hello” or “How are you?” or “Where is the bathroom?” and work your way up from there. (Of course, learning that last phrase doesn’t help unless you also can understand the answer.) So when a colleague says something unintelligible about RBI, just look ‘em in the eye and reply, “RAGAGEP.” 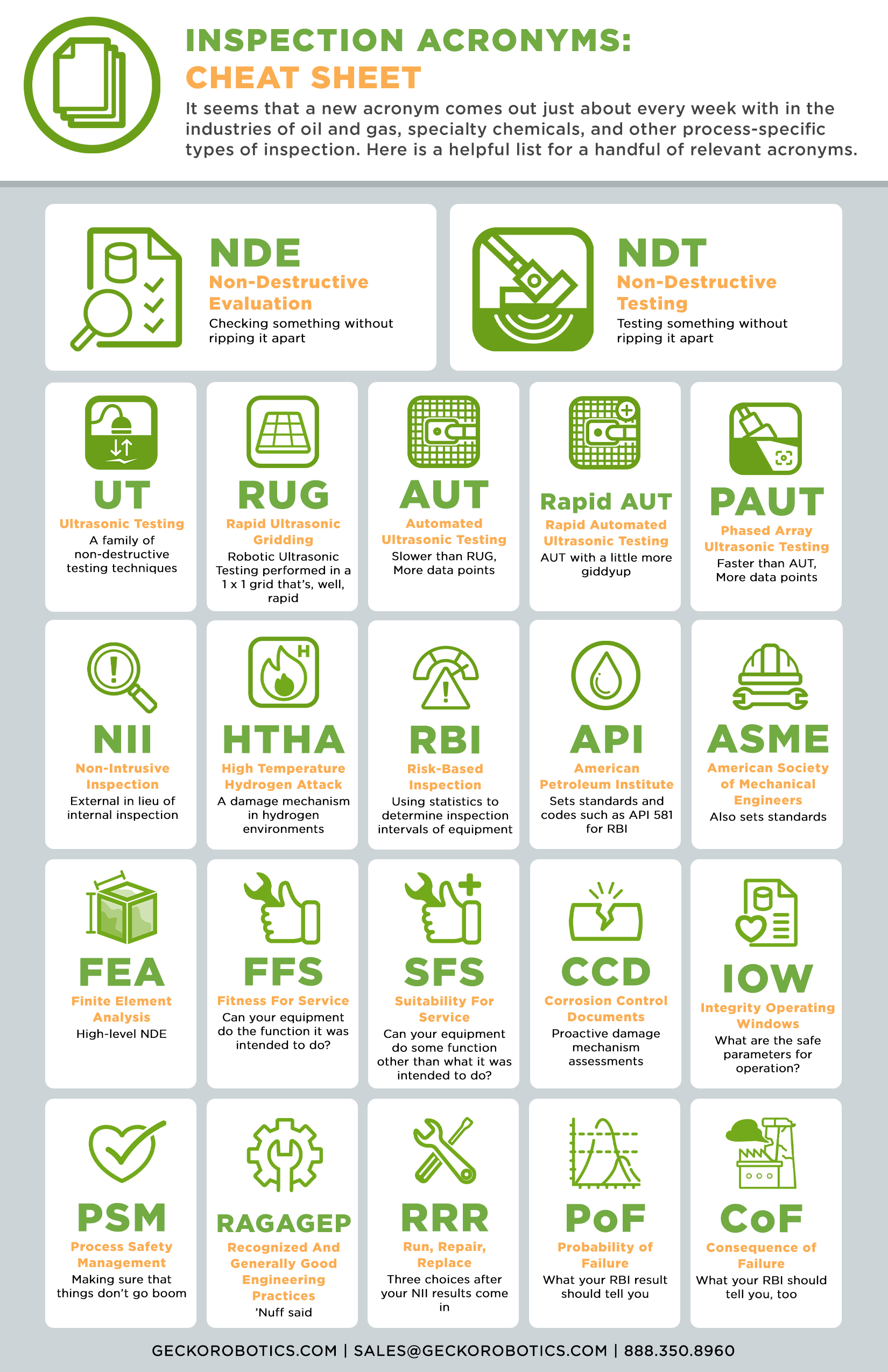