An Automated Approach to Detecting Corrosion Under Insulation

Corrosion under insulation (CUI) is corrosion that occurs in the base metal of piping, storage tanks, pressure vessels, and other assets when moisture penetrates the outer insulation. Corrosion and damage to the insulation are difficult to detect without the costly process of removing portions of it and performing an inspection. Standard techniques help identify damage in isolated areas but are resource intensive if prioritizing the overall condition of the asset.

Alternatively, robotics-based NDT techniques, such as Rapid Ultrasonic Gridding (RUG), reveal CUI through an internal inspection without the need for scaffolding or removing insulation. This technique utilizes ultrasonic testing to measure the thickness of the insulated metal. When paired with data visualization tools, the readings are used to generate 2D or 3D corrosion heat maps of the entire asset.

Corrosion under insulation (CUI) is a well-documented phenomenon that occurs in assets across many processing industries, including oil and gas, power, and chemical/petrochemical. According to Inspectioneering, CUI is defined as corrosion in the base metal of carbon and low alloy steel assets due to moisture accumulation under the insulation. This damage mechanism is pervasive amongst insulated assets because moisture will inevitably penetrate the insulation despite the mitigating measures taken. Often, this goes unnoticed until the corrosion progresses to failure.

CUI is a blanket term for several corrosive processes that occur under various conditions and temperatures. Inspectioneering summarizes the three most common corrosion types:

Due to the widespread occurrence of CUI, considerable resources are spent to mitigate, inspect, and repair assets. In 2014, API released Recommended Practice 583: Corrosion Under Insulation and Fireproofing to cover the “design, maintenance, inspection, and mitigation practices” for owners/operators to address these damage mechanisms. API RP 583, plus a growing number of codes, standards, and best practices, provides guidance, yet CUI remains a silent enemy.

Unsurprisingly, CUI is so widespread and difficult to detect because it is not clearly visible. But, there are several inspection approaches for identifying CUI, including but not limited to visual inspection, radiography, pulsed eddy current, and guided wave ultrasonics.

Visual Inspection: This method uses brute forcing, which involves manually stripping insulation from the equipment, conducting a visual inspection, and then replacing the insulation. 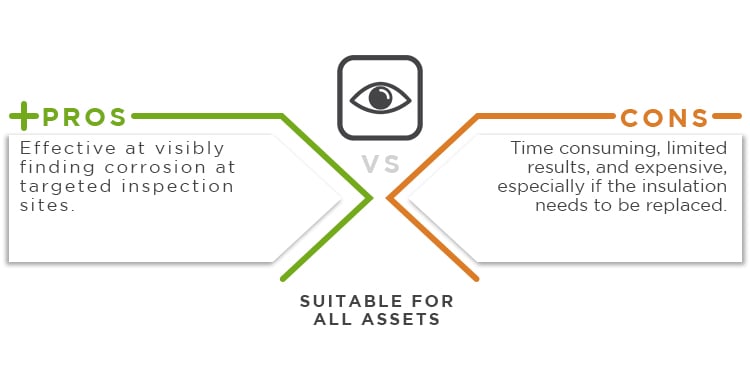 Radiography: X-ray technology is used to create real-time images of the metal’s thickness. There are a few different approaches that can be used depending on the particular application. 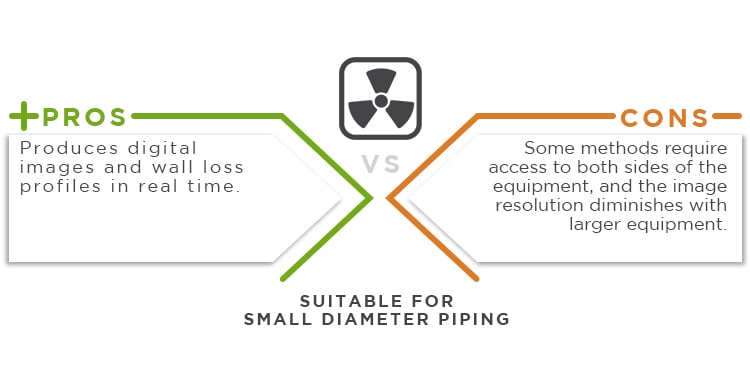 Pulsed Eddy Current: Suitable for use with any material that conducts electricity, this method uses a probe to send electromagnetic waves to test material thickness. 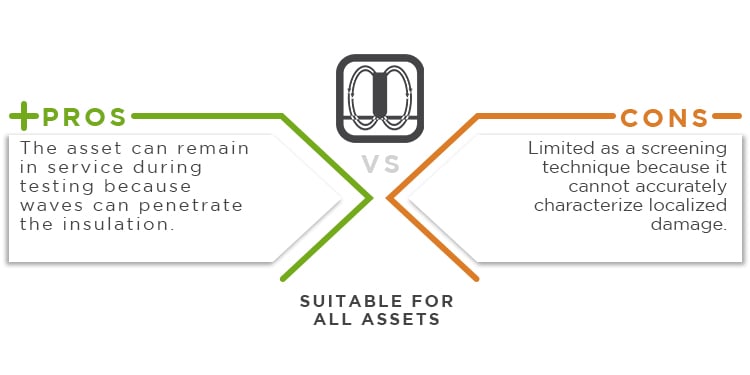 Guided Wave Ultrasonics: A ring of ultrasonic transducers is placed around a pipe and uses sound waves to detect corrosion and damage.

Each of the standard inspection methods has its benefits and limitations. However, generally speaking, they produce a limited statistical sampling of the asset’s condition and can be resource intensive. 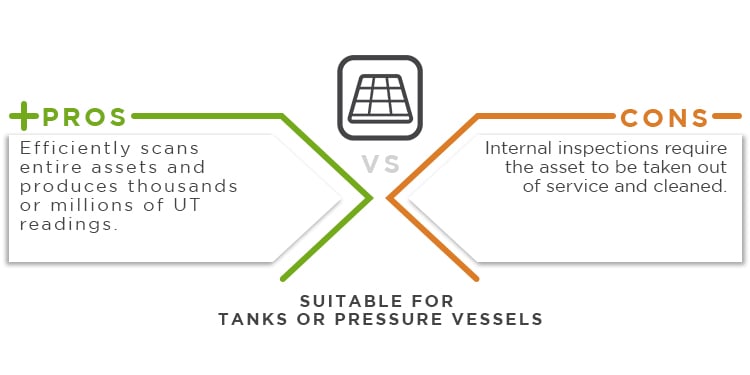 RUG is not without limitations. Preparing an asset for an internal inspection requires resources and planning. However, it’s extremely beneficial to find corrosion from the inside of the asset because that translates to areas where insulation should be assessed for wear or damage on the outside. This solution reduces the time spent spot-checking for CUI by eliminating guesswork and locating corrosion at its source.

This concept is best illustrated by a use case involving a petroleum oil tank. The owner of the tank suspected CUI damage. Therefore, an internal inspection was ordered using RUG instead of using the standard manual UT technique for visible corrosion. 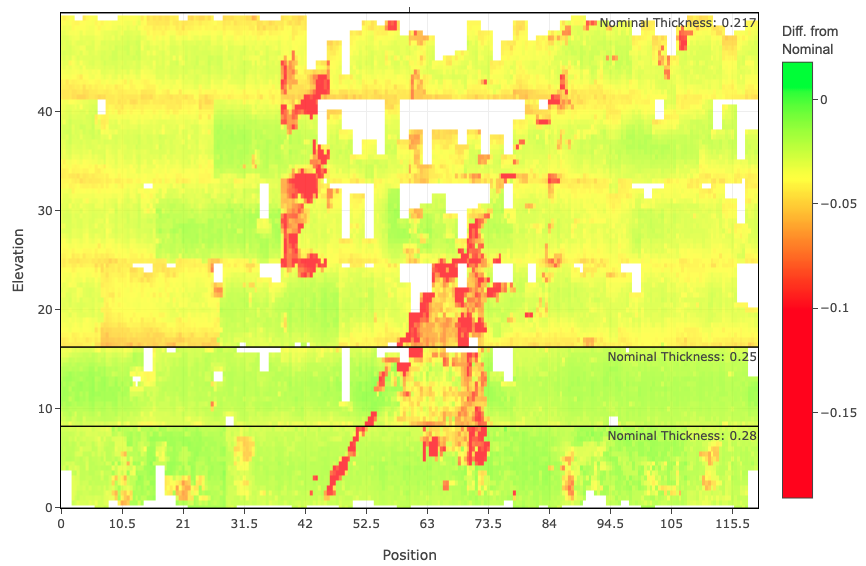 The entire tank shell was inspected in two shifts using one robot. The inspection produced 5.8 million UT readings which are visualized in the 2D thickness map above. Interestingly, areas with the most corrosion (indicated in red) are along the outside staircase of the tank. Upon further investigation, they discovered moisture was seeping in under the insulation near the stair cutouts. Before the RUG inspection, the owner was not privy to this or the extent of the CUI. Armed with inspection data, the owner could address one of the root causes of CUI in this tank and make the necessary repairs.

CUI is a pervasive and detrimental damage mechanism that commonly goes undetected in equipment until it fails. Technological advancements in inspection techniques are getting closer to finding a turnkey solution for CUI detection, but as it stands, no method is without limitations.

However, when the entire condition of the asset is in question, robot-based AUT techniques, such as RUG, can efficiently and accurately identify CUI in the walls of large equipment, including tanks and pressure vessels. Additionally, with data visualization in a color-coded heat map that is available on-demand in an online portal, the asset’s owner/operator can make data-driven decisions on managing the corrosion and pinpoint areas to assess the outside insulation for wear or damage.