Boilers play an essential role in improving the efficiency of thermal power generation. Three boiler sections, economizer, superheater, and reheater, are tightly bundled tube assemblies inherent to the process by maintaining high temperature feedwater and steam that drives the steam turbine and generator. Tube assemblies can be vertical or horizontal, but the focus of this article are assemblies in the horizontal configuration. Because of the curved design, depth of tubing, location, and contents they are subject to a variety of corrosion and erosion mechanisms that can result in failure and unplanned outages.

The susceptibility for failure in a tube assembly is further exacerbated by inadequate inspection methods for detecting or predicting corrosion and erosion damage. However, specialized robot-based NDT techniques, such as Rapid Ultrasonic Gridding (RUG), offer unparalleled coverage and data compared to traditional methods, giving owner/operators the confidence that their equipment can operate optimally.

In general, thermal power generation is driven by high temperature and high pressure steam used to turn a steam turbine. The rotation of the steam turbine provides motion to a generator that produces energy. Boilers play an essential role in this process by transferring heat energy into the kinetic energy of pressurized steam in the most efficient way possible[1]. In pulverized coal (PC) boilers heat energy is produced by the combustion of coal whereas in circulating fluidized bed (CFB) boilers it comes from the combustion of biomass or waste fuels.

Boilers are comprised of an interconnected web of equipment including tubing, piping, drums, and headers to generate steam and keep it at a high temperature and high pressure for efficient energy production. In order to maintain heat transfer throughout the process, a few components in the backpass are composed of tightly assembled tubing. These tube assemblies are found in the economizer, superheater, and reheater sections of the boiler. 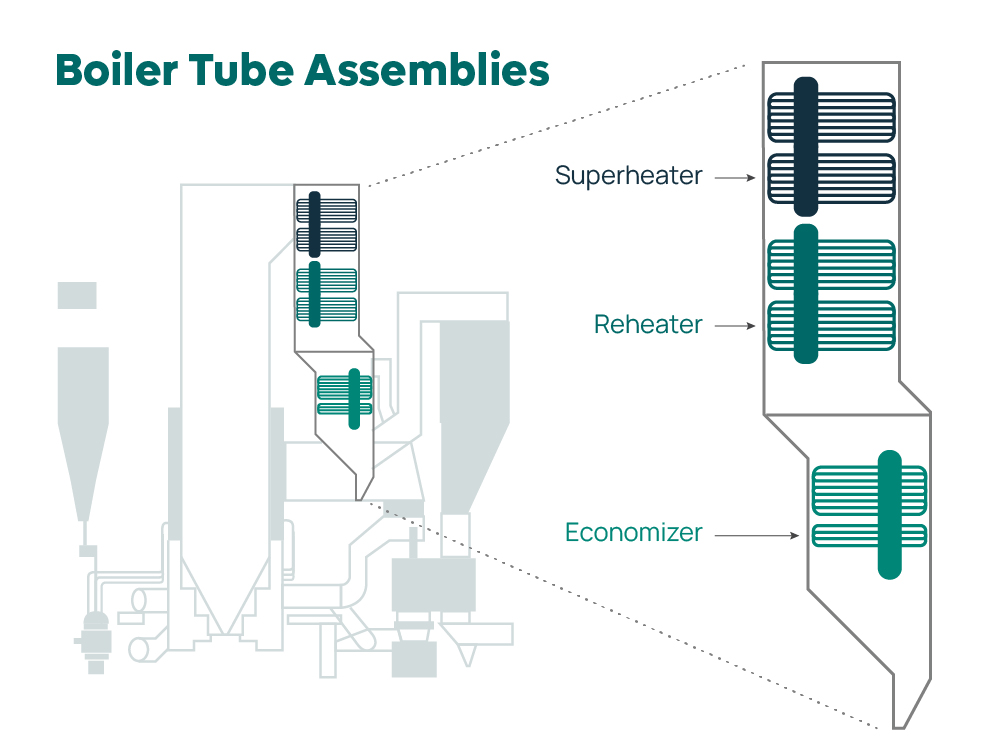 Economizer, superheater, and reheater in a horizontal configuration.

Within the economizer, high pressure water from a pump is heated by capturing energy from the flue gas. When feedwater is at a high temperature, it lowers the need for additional energy input as it travels through the downcomer then into the waterwalls where it’s turned into steam. One additional benefit of the economizer is to prevent the boiler from being flooded by cold water that cannot condense into steam.

After the steam is generated, it travels to the superheater, which as the name suggests, superheats the steam to the appropriate temperature. High pressure and high temperature steam is then sent to the turbine. This process increases the efficiency of the boiler by 5%.

The steam loses heat as it travels along the blades of the steam turbine. In order to maintain efficiency, the steam is sent to the reheater after the first turbine stage. Cooler steam is reheated then returns to the turbine which increases the power output and efficiency of the process by an additional 3%.

Because of their packed, curved design, contents, and environment, economizers, superheaters, and reheaters are prone to a number of corrosion and erosion damage mechanisms.

Because the economizer contains water and the superheater and reheater contain steam, they generally experience different damage mechanisms.

Common damage mechanisms in the economizer include, but are not limited to[2]:

Common damage mechanisms for the superheater and reheater include, but are not limited to[2]:

Traditionally, tube assemblies are inspected manually with visual or ultrasonic testing (UT) tools. The tightly packed tubing is pushed apart using airbags and inspectors can generally only access the tubes they can reach by hand or extension devices. Because assemblies can be upwards of 12 feet deep, much of it is left uninspected.

Rapid Ultrasonic Gridding (RUG) is a robot-enabled ultrasonic testing method that produces corrosion maps to identify wall thinning at the earliest stages. Typically, it produces 1,000x more data than manual techniques. This method was applied to a specialized robot designed with an extendable arm that fits between tight tube assemblies and can access tubing at a depth of 10 feet (3 meters).

As the robot crawls along, three UT transducers hug the side of the tube and collect a combined 750 readings per linear foot (228 readings/linear meter). The result is a color-coded corrosion map that displays the wall thickness from nominal, as shown below. The data is available through an online portal for owner/operators to access as needed. The maps are plotted from encoder data that captures X-Y coordinate information as the robot scans the tubing. 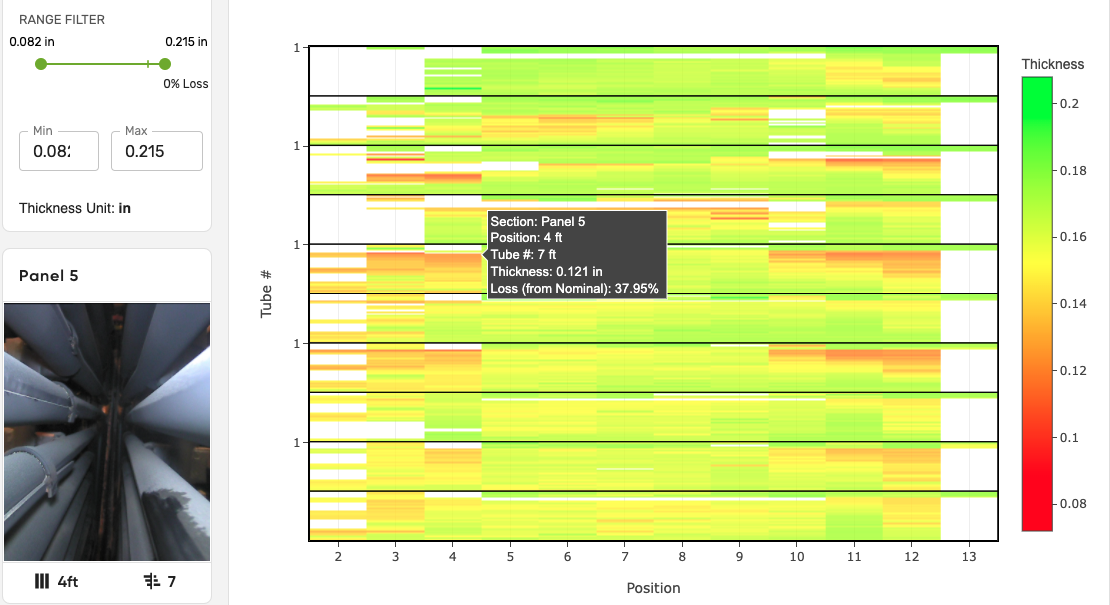 With this information, owner/operators can effectively maintain the horizontal tube assemblies in their boiler by identifing patterns of erosion and corrosion, pinpointing areas in need of immediate repair, and planning for future outages. Beyond that, they can use data from routine RUG inspections to track the corrosion rate of the assemblies and iterate on preventative maintenance plans.