Asset health is paramount to the efficient and safe operation of facilities producing energy and manufactured goods. Ultrasonic corrosion mapping is a non-destructive testing (NDT) technique that uses data from ultrasonic measurements to map material thickness across a piece of equipment, such as tanks, pipes, and pressure vessels. The data is used to graph corrosion on the equipment for easy visual interpretation. Currently, there are a number of tools available to complete corrosion mapping inspections. However, one automated dual linear phased array technique offers increased productivity, accuracy, and data density over other methods.

As one of the most commonly used tools for corrosion mapping, ultrasonic testing (UT) techniques inform mechanical integrity plans by allowing inspectors to measure and monitor the thickness of equipment, determine corrosion rates, and plan repairs and maintenance.

Pitting corrosion, a type of localized corrosion is considered more detrimental to equipment because it is difficult to detect and predict. In the base metal, pitting is characterized by “holes” or pits that can be caused by localized chemical or mechanical factors, damage to the protective coating, and the presence of nonmetallic inclusions.

In general, UT detects corrosion and other damage mechanisms by sending ultrasonic sound waves into the wall of the base metal. Material thickness is measured by calculating the time it takes for the sound wave to reflect back to the transducer after encountering the backwall or an imperfection in the material. The sound wave hits perpendicular to the damage for a clear and strong reflection in an ideal scenario. However, the damage is typically irregularly shaped resulting in a weak reflection, and sometimes, poor data transmission. 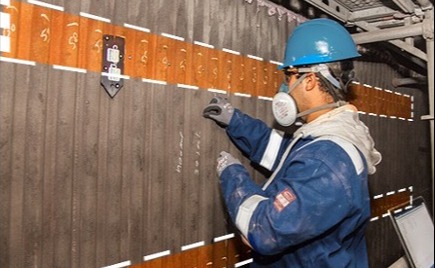 Conventional ultrasonic corrosion mapping inspections are completed manually using handheld devices. The inspector spot checks for wall thickness at particular points on the equipment within a hand-drawn grid. Then, the readings are entered manually into a spreadsheet that correlates to the drawn grid. There are many limitations to this approach including low data density, operator-based subjectivity, limited repeatability, inefficiency, and inconsistent probability of detection.

Automating the process can resolve some of the issues with manual inspections. Conventional automated ultrasonic testing (AUT) methods utilize a UT transducer on a rastering robotic scanner. This approach improves data density but has low productivity due to transducer size, can be unsafe for operators, is prone to equipment failure, and can only move in one direction. However, one technique, Rapid Ultrasonic Gridding, uses multiple transducers on the front of a steerable robot for increased productivity and data density compared to other automated ultrasonic corrosion mapping methods.

Phased array ultrasonic testing (PAUT) is a type of UT that was developed to overcome some of the challenges of conventional ultrasonics. PAUT utilizes software-enabled pulsing to excite a set of ultrasonic elements, which can be controlled by a time delay to steer and focus the sound waves at various depths in the metal as preferred. One phased array unit contains anywhere from 8 to 256 individual elements, where data density and probability of detection increase proportionally with the element number. PAUT has a variety of applications including identifying and sizing damage mechanisms, performing thickness testing, corrosion mapping, and generating acoustic data images. 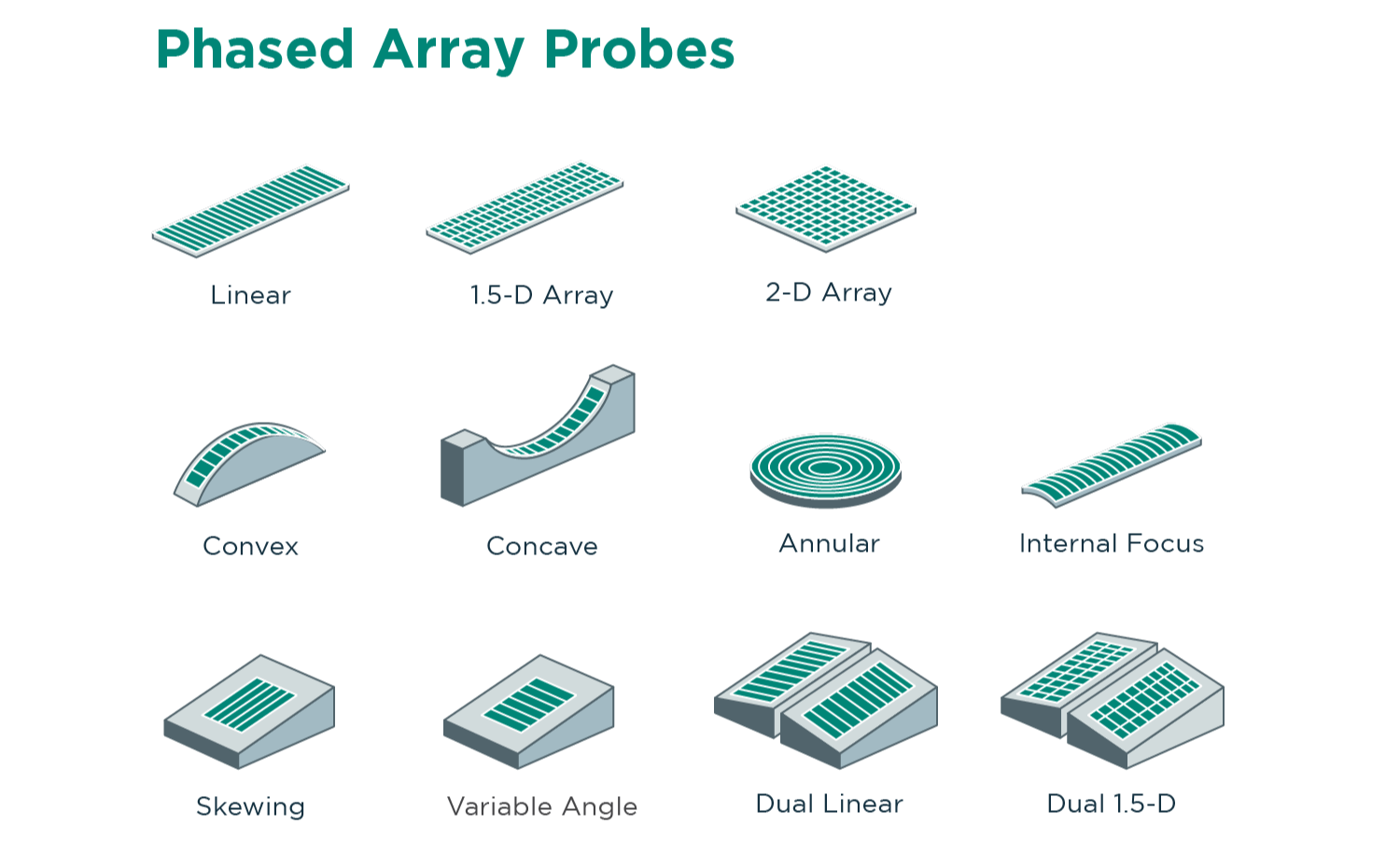 The element configuration can vary to achieve specific results, as shown above. Most utilize a pulse-echo configuration where one set of elements sends and receives the sound waves and reflections. However, a dual linear array (shown on the bottom row of the graphic) is the preferred configuration for corrosion mapping. The dual linear array reduces the interface echo and improves near-surface detection by utilizing one side of elements to send the signal and the other side to receive it, otherwise known as “pitch-catch.” In corrosion mapping, the probe is placed perpendicular to the base metal and the beam set is 0° linear, shooting straight into the wall. The pitch-catch configuration coupled with the linear beam set improves the ability to detect and quantify corrosion and pitting.

Similar to ultrasonic corrosion mapping, traditional phased array approaches are conducted manually with handheld devices and limitations also exist with this methodology. However, automated phased array corrosion mapping solutions, such as Rapid Automated Ultrasonic Testing (R-AUT), were created to overcome the challenges of manual and conventional AUT inspections. Automated PAUT utilizes a mechanically rastered robot to provide full asset coverage in a fraction of the time as conventional AUT. As shown in the graphic below, Rapid AUT covers a 10 foot2 area in just over three minutes with exceptional data density, compared to nearly fourteen minutes with conventional AUT scanning.

Rapid AUT identifies and quantifies damage in a wide range of ferromagnetic equipment, including tanks, pressure vessels, and piping as small as 4” in diameter. The dual linear array probe contains 64 elements to accurately detect, locate, and size general corrosion and pitting at depths down to 8 inches. In addition to corrosion, R-AUT can be used to identify sub-surface indications such as laminations or inclusions in the base metal regardless of signal amplitude.

The benefits of using a dual linear array for corrosion mapping include:

The data is presented in “high definition” corrosion maps. C-scan imagery indicates the location of damage based on the encoded information, as well as the pervasiveness of general or localized corrosion and/or pitting in the base metal. Imagery is color-coded, indicating wall loss from nominal.

As previously mentioned, Rapid Ultrasonic Gridding (RUG) is a robot-based corrosion mapping tool that utilizes conventional UT transducers to collect wall thickness data. RUG robots contain anywhere from 8-24 transducers with either a 0.25”x0.25” or 1”x1” resolution. Typically, RUG collects approximately 250 readings/ft. Comparatively, R-AUT’s dual linear phased array probe has a 0.039”x0.039” resolution and produces over 94,000 readings/ft2. The graphic below depicts the comparison in data density. The blue squares represent the data collected by RUG in 1”x1” and 0.25”x0.25” spacings whereas the green circles represent the data points collected by R-AUT in that same area. 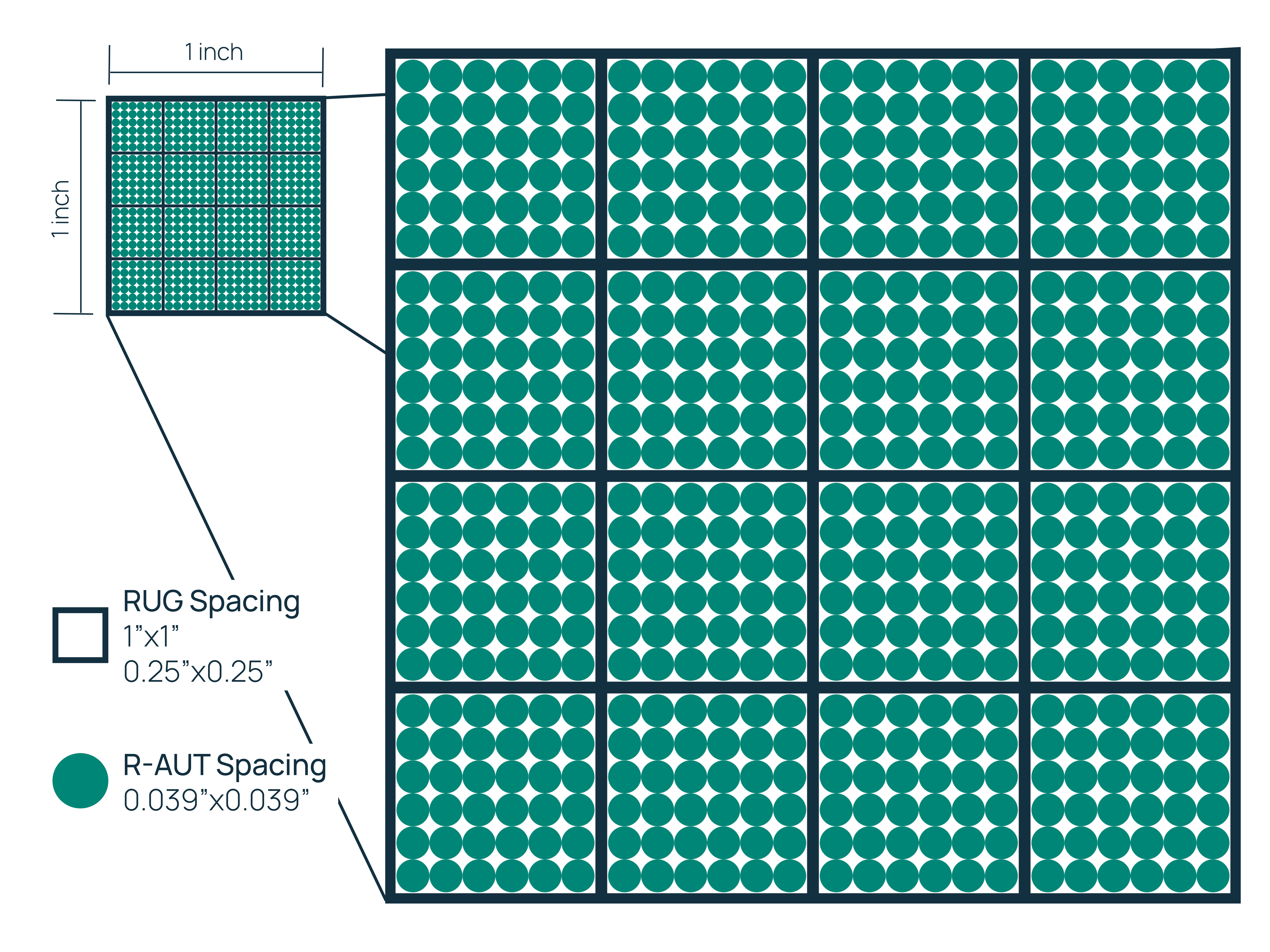 However, RUG is far more efficient when comparing productivity, covering up to 5,000 ft2 in a 12-hour shift. Whereas, R-AUT covers about 600 ft2 in the same time frame. In general, assets with a large surface area will benefit from RUG corrosion mapping inspections, including aboveground storage tanks, boiler waterwalls, silos, and some pressure vessels. Smaller assets in caustic environments would benefit from the increased data density of an R-AUT corrosion mapping inspection, including bullet tanks, towers, piping, and spheres. Both RUG and R-AUT provide magnitudes–over 1,000x–more data than traditional handheld corrosion mapping methods, at speeds over 10x faster than conventional AUT.

In conclusion, dual linear phased array is a valuable corrosion mapping tool for many industries, including oil and gas, chemical, government, power, and pulp and paper. The pitch-catch configuration improves near-surface detection and granular data density quantifies and sizes corrosion and pitting while providing other benefits including safety, productivity, steerability, reproducibility, and repeatability