On The Subject of Inner Diameter Boiler Tube Corrosion

Older Boilers are like Older Automobiles - Things Just Wear Down

While the drumbeat of boiler retirement is unabated, many power generation companies are able to continue to run boiler units 50+ years thanks to rigorous inspection and maintenance programs. Nevertheless, units tend to see fireside corrosion and erosion from the normal wear inherent in a pulverized coal boiler.  This type of wear-and-tear gets most of the focus, but it is just the obvious squeaky-wheel.  Let’s look at another prominent maintenance challenge.

Damage mechanisms can also exist in the Inner Diameter (ID) of boiler tubes. ID-side boiler tube corrosion can cause unplanned outages to address the issue. Boiler tube damage mechanisms are exacerbated by low water flow or flow disruption, often occurring around field weld lines. Due to the flow disruption, the likelihood of eventual tube damage is high just based on heavy local deposit growth.  Water chemistry issues caused by pre-boiler sources provide the chemical suspects that interact with tube walls.  These issues, combined, tend to produce deposits that are probable locations for Under Deposit Corrosion (UDC) to begin attacking the tube.  During our inspections, we’ve identified UDC and other hydrogen attacking mechanisms that can lead to  embrittlement of the metal and ultimate tube rupture failure. This can result in a catastrophic event. 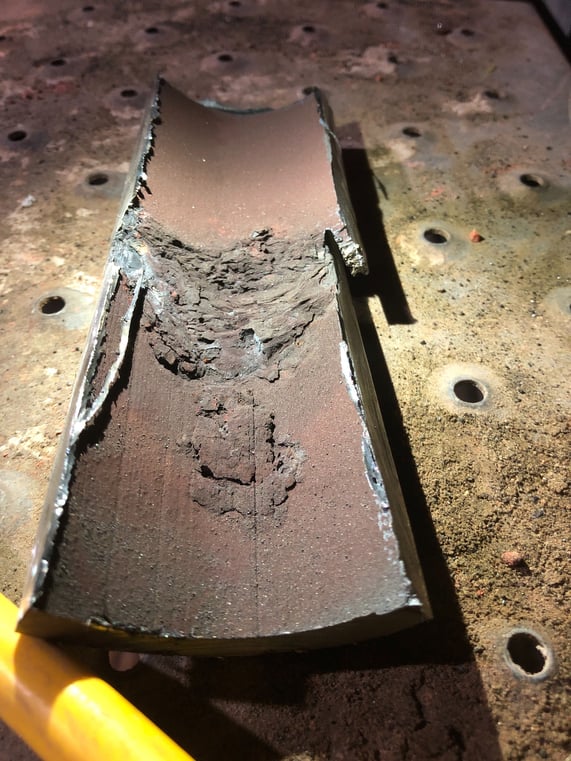 When a unit is taken offline for repairs, there is an urgent need to get it back online to generate power (and money) as soon as possible. Currently, inspections are done manually, requiring scaffolding and other access methods, and taking extended time to complete. The small amount of data coming from manual inspections can result in defect identification that is incomplete at best, or missed altogether at worst.

Repair teams are dispatched to make spot repairs on areas identified by manual inspection. The unit management thinks they have found and repaired the problem. However, after repairs and unit restart, maintenance teams discover additional corrosion problems that force the unit back into costly downtime, often in less than 24 hours after the previous repairs had been made. (To paraphrase Sallah (John Rhys-Davies) in the movie Raiders of the Lost Ark, “They’re looking in the wrong place!”)

As a result, power generation companies are exploring the use of robotic inspection technology to gather more actionable data in a much shorter amount of time.

More Data in Days not Weeks

In one recent engagement, Gecko Robotics completed a total boiler tube unit inspection in around three days, using two robots, utilizing swing stages instead of scaffolding and working around the clock. A previous manual inspection had taken 1½ weeks to complete, plus more time for data analysis.

During an outage or turnaround, even three days is a long time. The Gecko TOKA 3 Robots used on this assignment were running at a slower speed than they are normally capable of. This was to increase the number of readings taken in order to have more data points to analyze. At this site, we took 800 readings per boiler tube foot, for over 25 million readings in total. On a normal engagement the robot would move faster and produce around 5 million data points, still a lot more data than traditional inspection methods can deliver.  Our newest robots have been designed to go faster and collect more data to drive inspection times even lower.

Through the use of proprietary algorithms, Gecko was able to quickly pinpoint the locations of small scale defects. Defects are identified by geolocating the tube, height and angle of the reading that revealed tube wall thinning.  With the ability to deliver 50% of the data in just 24 hours after completion of the inspection, plant personnel were able to clearly identify the defects as UDC and could begin repair efforts. The remaining 50% of data was delivered just 24 hours after that. Using our interactive portal and downloadable thickness maps, the customer was able to conduct comprehensive repair planning that resulted in the boiler operating over 7 months without an unplanned outage.

Proof of Concept - a Good Way to Start

Rapid Ultrasonic Gridding (RUG) robots are the leading edge inspection technology for boilers and other fixed equipment. But, as with any innovative technology, companies are skeptical of committing to a large-scale project without a proof-of-concept demonstration.

For the power generation company referenced in this case, Gecko was brought in to do just one unit in the plant. As described, the assignment was completed in 3 days, with minimal logistics required for tube access.

Because of the success of the initial engagement, Gecko was awarded multiple unit inspections by the power generation company. At this writing, we have completed five unit inspections, with an expanded scope of work to include scanning for external wear, as well as ID corrosion.

Proof-of-Concept engagements and other one-off assignments have proven to be good starting points for power generation companies like this one. Company and engineering management are able to see first-hand the value that Gecko Robotics delivers. In this case, and many others, Gecko’s scope of work and length of engagement are expanded as a result.