The Evolution of Robotics

When most people think about robots, they might envision a leather jacket clad, sunglasses-wearing Arnold Schwarzenegger hoisting a shotgun, Star Wars’ R2-D2, Rosie from “The Jetsons,” or Optimus Prime. While those examples are indeed robots, they are just one robotic concept and quite a bit different than most types of advanced robotic technologies being used today for a vast range of purposes. These include—but are certainly not limited to— fields such as aerospace, medicine and healthcare, the military, agriculture, and of course, the energy industry.

In oil, gas and power, robotics offer capabilities to change the game for inspections, data collection, asset integrity, safety and the list goes on. But before we dive further into the seemingly endless potential of robotics in energy, let's talk about what robotics encompasses and some history and examples of evolution over time.

While a humanlike appearance is what we typically picture, most robots don’t resemble us at all, although this concept inspired early inventors.

So, what’s the exact definition of robotics? According to Merriam Webster, Robotics: the branch of technology that deals with the design, construction, operation, and application of robots.

Okay, but what constitutes a robot, then? There are many slightly varying definitions out there, and though most refer to that humanlike appearance, most relevant to our discussion today is likely this one from Dictionary.com: A machine designed to replace human beings in performing a variety of tasks, either on command or by being programmed in advance.

If we combine these two and consider the context we’re focusing on, robotics consist of the design, construction and operating of electro-mechanical machines, in conjunction with the computer systems for their programming, control, sensory feedback and information processing.

Now, let’s back up and start from the beginning to take a look at the most primitive robots and their purpose, technology evolution over time, and how robotics can play a crucial role in the power, oil and gas and other energy industry sectors, particularly when it comes to asset inspections. 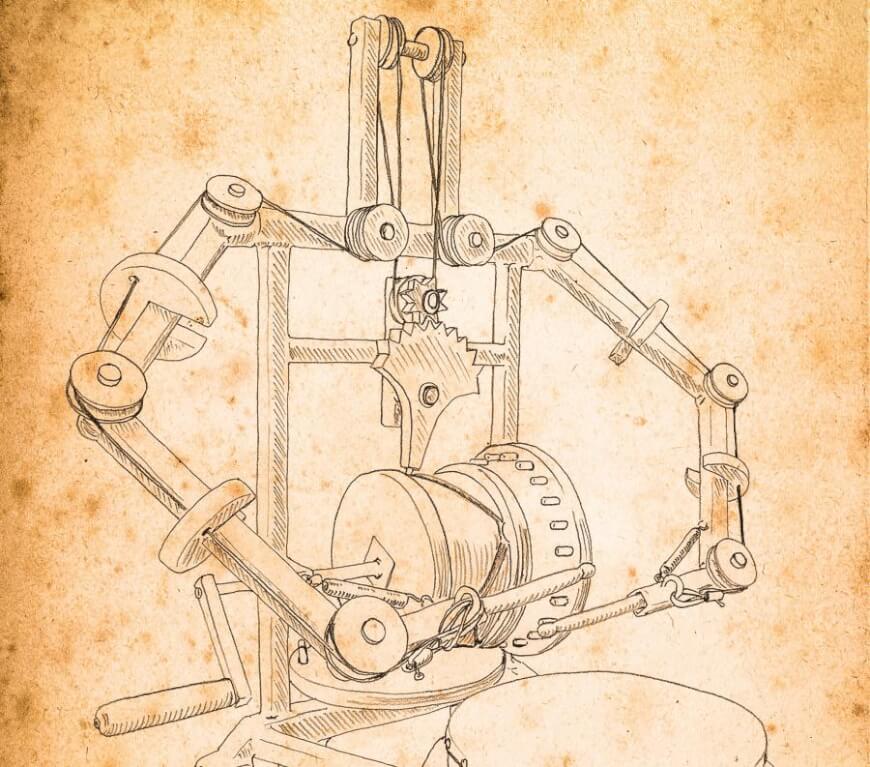 Around the same time, mathematician and astrologer Johannes Müller von Könisberg’s created an iron eagle and wooden beetle that could allegedly fly. Mechanical toys came in the 17th century (Mary Shelley is said to have been inspired by watchmaker Pierre Jacquet-Droz’s animated dolls, leading her to write Frankenstein), and in 1868 came the notable “Newark Steam Man,” created by New Jersey Inventors Isaac Grass and Zadoc Dederick. The robot, powered by steam and resembling a human, was designed to pull a cart. While production plans never moved forward, mostly due to cost, the idea was picked up again in 1893 by Canadian inventor George Moore. The fully mobile robot, dubbed “an automatic man,” was powered by an internal steam engine could reportedly walk and pull light loads.

And at the very end of the 19th century in 1898, Nikola Tesla discovered remote control technology and subsequently designed, patented, built and demonstrated a radio-controlled boat, a significant accomplishment that went relatively unrecognized at the time. 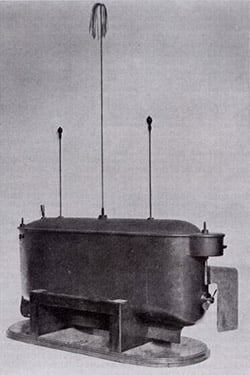 In fact, it really wasn’t until well into the 20th century that significant robotic advancements were pursued, accomplished and realized, largely as a strategy to increase efficiency and safety in the booming manufacturing industry. Interestingly, the word “robot” itself wasn’t even invented until 1920, by Karel Čapek, a Czech playwright and novelist, in Rossum’s Universal Robots. The premise of this play is that mass-produced, humanlike droids revolt and begin killing their masters.

A couple of decades later came Isaac Asimov’s Three Laws of Robotics, which were basically three “rules” that suggested how robots should operate (and a little superficial/fictitious):

While these rules really are more applicable to The Terminator than most robotic technologies, this is when the term and concept of robotics began to take shape.

The Mid-1900s and Beyond: Significant Advancements

Jumping to the 1930s, this is when William V. Pollard filed a patent for the first robotic arm of sorts, or “position-controlling apparatus.” While it never got built, it is said to have been used as a basis for other inventors who pursued similar concepts.

Simultaneously in 1939, Harold A. Roselund filed a patent for a spray-painting robotic arm, and later, the patented was granted to the DeVilbiss Company, which would eventually become a major U.S. supplier of robotic arms (Encylopedia.com, A Brief History of Robotics).

Now enter the Grandfather and Father of Robotics. The 1950s saw a major breakthrough with creation of the Unimate, the first industrial robot in the U.S. 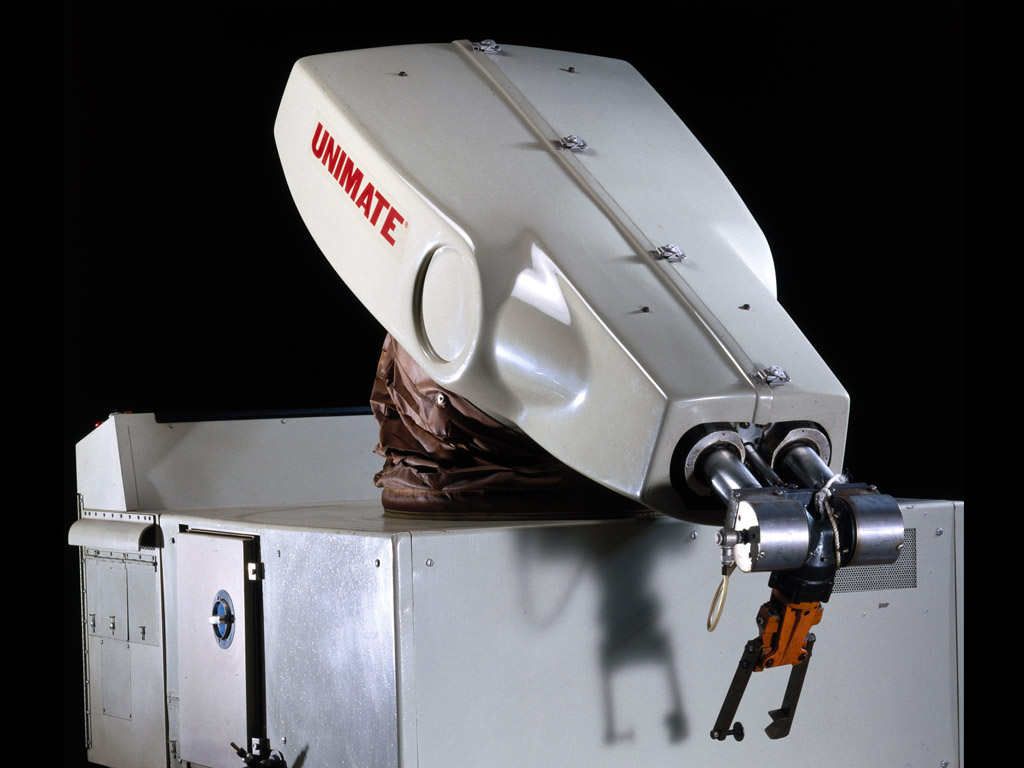 There are conflicting accounts of who actually invented the arm and who moved forward with the design, but Joseph Frederick Engelberger and George Devol are both credited for development of the Unimate, the first of which was installed in 1962 at a New Jersey General Mills automobile plant to automate metalworking and welding processes. The ‘50s saw development of the first underwater vehicle, which quickly evolved and was used mostly by the military throughout the ‘60s and ‘70s.

So now that we’re in the 1960s, this decade also saw development of computer-operated robotic hands and arms and installations in places like hospitals, as well the opening of artificial intelligence labs and creation of automated intelligence (AI) programs.

The 1970s introduced Star Wars droids, and in 1975, robotic technology was used on Viking 1 and 2 space probes—the first U.S. mission to land a spacecraft safely on the surface of Mars and return images of the surface, according to NASA.  A long, robotic digging arm was designed to extend and contract to collect soil for experiments, and though mechanical arms had been used before, unlike those instances, Viking technology was actually able to conduct on-site experiments with the soil—chemical and physical analysis, and send that data back to Earth.

In the 1980s, the number of robotics companies began steadily growing worldwide. The Robotics Institute had opened at Carnegie Mellon, and the first robotics surgical arm was documented. From this point, technology exploded. The first unmanned drone debuted in the ‘90s, and continued innovation brought cutting-edge inventions into households, such as autonomous vacuum cleaners (e.g., Roomba). And then, driverless cars.

There are countless examples not mentioned above, but now we’ll focus on oil, gas and power.

Robotics in the Energy Industry

We know that robotics can take on many different shapes and sizes, widely varying in purpose and use, but ultimately, they are defined as intelligent, electromechanical machines that utilize sensory feedback and software to gather data and achieve a goal. In the oil, gas or power markets, this may be to determine the thickness of a tank wall or boiler tube to identify corrosion, or discover a defect before it affects oil piping integrity.

The control valve is one of the earliest robotics technologies used in the oil and gas industry. While these aren’t really what comes to mind when we think of robotics, they do have robotic functions that assist operators. These devices were invented for process control. Rather than an operator having to manually adjust the valve’s position, it uses inputs from a measuring device to regulate or control pressure, temperature and flow, and adjusts its position based on the variation of input signals. Emergency isolation valves were created as safety devices to shut down and isolate remotely, so there is no risk of operator injury (or worse).

During the past couple of decades, the use of robotics for inspections haven’t been widely utilized despite their proven effectiveness, but that is changing as the technology has become more sophisticated and the benefits are becoming more widely recognized. These include, but are definitely not limited to, the following.

Elimination of safety hazards. This one is pretty straightforward. For example, consider human exposure to high-heat areas or climbing to high elevations. Reducing risk and danger is tough to argue. Any time a person in a hazardous situation can be replaced by a robot (or at the very least, assisted) that can perform the task just as good—or even much better—it’s easy to justify that exchange.

More, extremely accurate data collection. The availability, accuracy and quality of data are crucial to the reliability of an asset. While the level of experience can vary, even the most seasoned inspector is subject to human nature, challenged to achieve high-quality, pinpoint accuracy and 100% certainty. And of course, he or she can only work so fast. The magnetic crawlers mentioned above are much more sophisticated today than they were 20 years ago—multiprobe systems that can gather data in the blink of an eye (or quicker). The systems used to measure ultrasonic thickness can produce quantitative corrosion maps at a rate that isn’t even in the same ballpark when performed manually.

Besides human endurance limitations, there are often physical limitations—some areas are simply difficult to inspect. Awkward angles and tight spaces can hinder an inspector’s abilities. A robot, however, can be designed to overcome these issues and capture data in places that would not otherwise be accessible. The robot’s size, shape and configuration can be designed to allow them access to these areas and mitigate or eliminate these limitations.

Improved efficiency of data collection and analytics. Related to the theme of human nature, such is that to err, humans have limitations when it comes to memory and fatigue. When working with such large volumes of data, forgetting isn’t uncommon, and that can result in transcriptional errors. With a robot, however, the data is gathered and transmitted in real time, so rather than focusing on remembering the data, the location of the data and transposing, the inspector can focus more on data analysis. Most of the robots being used for inspections today use sensors, cameras, geotags, etc., to record the exact location the data was gathered at, and thus have the ability to return to that exact location in the future. In short, robotics can mitigate the high human error rate that is often seen in industry quality management programs.

And as for the analysis, being able to maximize the value of that large volume of accurate data is critical. The ability to manage and gather insight about data sets today has also evolved dramatically during the past couple of decades and has driven home the ROI for robotics support.

Minimization of operational interruptions, improved asset reliability. Robots are eliminating the limitations of inspections and changing best practices. For example, for an injection point piping circuit, a full-coverage inspection is not recommended or typically performed, due to the practicality of cost and time (i.e., erecting scaffolding, cranes, manlifts, rope access and the sheer size of the asset). Best practices advise a representative sample of the injection circuit, but that does not provide 100% confidence, which would entail a 100% inspection. With robotics, this issue is drastically minimized or eliminated because a full-coverage inspection is possible, potentially identifying an issue requiring immediate attention. It may have otherwise gone undetected and potentially resulted in unplanned downtime and higher repair expenditures. For small-diameter piping systems, for example, visual inspections have been relied on. In this case, magnetic and nonmagnetic rovers can cover long runs of piping systems to look for damage that the inspector can’t see, like plugging and fouling.

Robotics is a fascinating field that has evolved dramatically, advancing over hundreds of years by building on the most primitive designs. The benefits of robotics for asset inspections generate return on investments in many ways, including overall savings, actionable data for quick decision-making, improved safety and risk reduction, and enhanced preventative maintenance performance.

And while it’s unlikely the robot performing your asset inspection will look like The Terminator, once the benefits are realized—you will want it to “be back."