What is a Penstock and its Role in Hydropower?

Hydroelectric power generation is a renewable source of energy production that utilizes the kinetic energy of moving water to spin a turbine which activates a generator to produce electricity. In 2021, hydropower was responsible for 7.3% of the United States' total electricity production and approximately 37% of the total for renewable energy generation[1]. While renewables currently comprise about of fifth of energy generation in the country, that number is projected to increase over the next few years.

This article will cover the basics of hydropower and how it is generated, specifically considering one of its most important asset components—penstocks—and how modern nondestructive testing technologies can help ensure these critical structures are intact and operating efficiently as the demand for renewable energy grows.

Half of the United State’s hydropower production is concentrated in the West, with about 50% of power generation coming from Washington, California, and Oregon[2]. Namely, Washington is home to the Grand Coulee Dam, the largest hydropower facility in the U.S. which generates 6,800 MW[3] of the country's 80,000 MW capacity, or 8.5%. Across the country, hydropower usage also varies significantly. Delaware and Mississippi are the only states that do not consume any hydroelectric power, whereas it accounts for nearly 74% of Washington state’s power usage[4].

Simply, hydroelectric power generation uses the flow of water to spin a turbine which activates a generator that converts the kinetic energy to electricity. There are three types of hydropower facilities: impoundment, diversion, and pumped storage, which vary in size and capacity from powering single homes to providing electricity for utility companies.

Impoundment: Impoundment facilities are the most common power plants with the majority constituting a large hydropower system with a capacity exceeding 30 MW.  In this configuration, dams are used to accumulate water in a reservoir. When water is released, it flows through a penstock before turning the turbine. The flow of water can be adjusted to meet energy, recreational, or environmental needs. The 2,080 MW Hoover Dam in Nevada is a well-known example of an impoundment hydro facility[5].

Diversion: As the name suggests, these plants divert flowing river water through a penstock and/or canal to a powerhouse at a lower elevation. They often have little or no water storage, and power generation is hinged on the river flow. Because of this, they are typically less reliable than impoundment facilities as a consistent source of energy. An example of a major diversion system is the Chief Joseph Dam near Bridgeport, Washington which has a capacity of over 2,000 MW[6].

Pumped storage: These facilities are often compared to batteries, in times of low power demand, they store energy by pumping water through a penstock from a lower reservoir to a higher reservoir. In times of high demand, the water is released back into the lower reservoir, which pushes the turbine to generate power. These plants are typically smaller in capacity than their diversion and impoundment counterparts, the largest being Bad Creek Hydroelectric Station in Oconee County, SC which uses water from three manmade lakes to produce 1,065 MW of power[7].

What is a Penstock?

The penstock is one of the important components in the functioning of a hydropower system. Penstocks are pressure vessels in the form of a channel or pipe that carries water from the source to the turbine in the power station. Depending on the size of the facility, they vary in length, circumference, and number. For example, the Hoover Dam has two sizes of penstocks. One set is 30 feet (9 meters) in diameter and the dam also uses sixteen 13 foot (4 meters) diameter penstocks that total 5,800 feet (1,770 meters) in length[5]. Whereas the Bad Creek Hydroelectric Station contains four penstocks that taper throughout their length from 13.8 feet (4.2 meters) to 8.4 feet (2.5 meters)[7]. 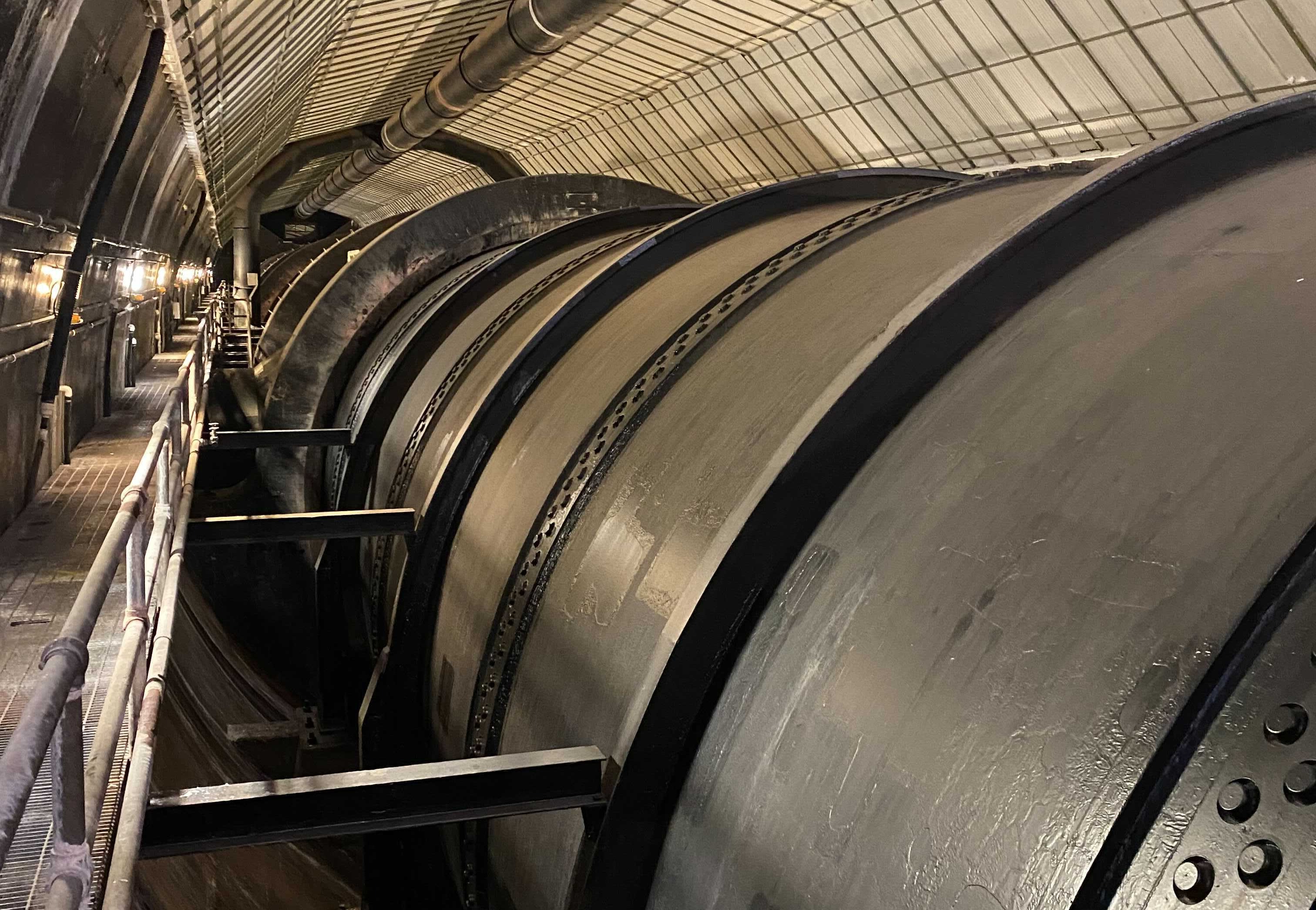 Most penstocks are constructed from steel and may be buried underground, situated above ground with steel or concrete saddle supports along the length of piping, or encapsulated inside concrete towers or tunnels (shown above). Because they are metal vessels that carry water, penstocks are prone to corrosion mechanisms, including uniform corrosion, crevice corrosion, pitting, and erosion corrosion[8].

Interestingly, in the United States, hydropower facilities have been in operation for an average of 64 years. According to EIA records, the 50 oldest power plants in the country are all hydroelectric, some dating back to the early 1900s. That understood it’s essential that these large pieces of equipment are regularly inspected to develop preventative maintenance plans.

The Federal Energy Regulatory Commission (FERC) recommends that penstock shells should be visually inspected once a year to look for leaks, misalignment, missing rivets, and other damage. However, this may not always be possible for penstocks that are buried underground. Additionally, penstocks should be inspected with ultrasonic testing (UT) methods at a minimum of every five years to check for shell thinning due to corrosion and erosion.

For buried or encapsulated penstocks, a UT inspection can be performed internally by dewatering or removing the water from the equipment. For penstocks that aren't able to be dewatered, remotely operated vehicles or robots may be used to collect visual and UT data, however, these techniques are generally less effective than other internal inspection methods [9]. When dewatering is possible, internal visual and UT inspections are the preferred methods for identifying damage from erosion, corrosion, pitting, and organic growth. 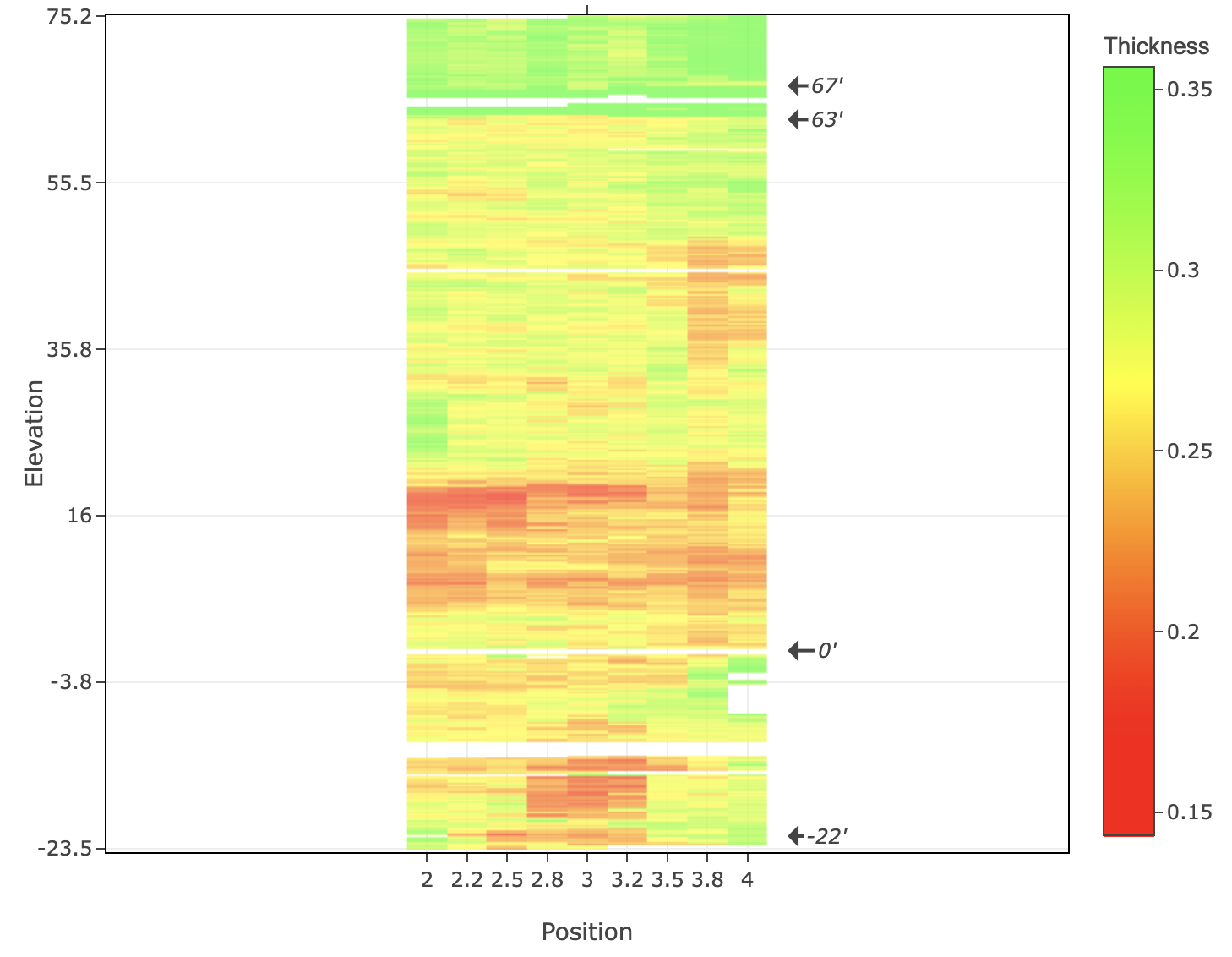 Traditionally, UT readings are taken manually at select locations along the penstock. However, this method only produces a limited data set about the condition of a vast piece of equipment. As hydropower facilities continue to age, a more holistic picture of asset health is needed to prevent failure and the possible negative consequences of failure which include flooding, environmental degradation, and even loss of life[9]. Luckily, modern robotic techniques allow for full asset coverage at unprecedented efficiency and data density. Rapid Ultrasonic Gridding (RUG) is a robotic UT technique for generalized corrosion mapping, depicted above. Rapid Automated Ultrasonic Testing (R-AUT) utilizes a dual linear phased array probe to identify and quantify wall thinning due to corrosion and pitting in the base metal of equipment, a high-definition version of corrosion mapping. Additionally, robot-enabled Phased Array UT (PAUT) is used along the weld lines collecting an immense amount of data to detect corrosion, cracking, and other defects.

In conclusion, penstocks are a vital component of hydropower generation by transporting water from the source to spin the turbine and activate the generator. As hydropower facilities continue to age, it is imperative that the essential equipment and vessels are routinely inspected and well maintained to avoid a lapse in power generation or environmental remediation. Robotic-enabled technologies, such as RUG, R-AUT, and PAUT provide a full-coverage solution for holistic asset conditions to keep the water flowing.