What is High Temperature Hydrogen Attack (HTHA) And Who is at Risk?

On April 2, 2010, at the Tesoro Refining and Marketing Company in Anacortes, Washington, employees were in the final stages of bringing three of six heat exchangers back online. The work was routine, performed every six months to address fouling that is common in vessels operating under such conditions. Though the set of exchangers being serviced were offline, three adjacent pressure vessels remained in service. when the staff was well into startup operations, the middle operating heat exchanger catastrophically ruptured. Releasing and igniting highly flammable hydrogen and naphtha, the failure caused an explosion and an intense fire. Seven employees working in proximity to the explosion were fatally injured.

According to the final report issued by the U.S. Chemical Safety and Hazard Investigation Board (CSB), the heat exchanger ruptured due to long-term damage caused by High Temperature Hydrogen Attack, or HTHA. The CSB report concluded that, if the prior audit of the naphtha hydrotreater unit—performed in March 2009—would have identified the susceptibility of the heat exchanger to HTHA the incident would likely have been prevented. . But Tesoro engineers—and even corrosion experts—did not believe HTHA could occur within the heat exchanger that ultimately failed, based on industry data that was later rendered as unreliable.

So what exactly is HTHA, under which conditions does it manifest, and how is it detected?

In simple terms, HTHA is a phenomenon or reaction that occurs within process equipment exposed to high temperatures in hydrogen-rich conditions—for example, oil refineries, like the Tesoro location, that produce products including gasoline, diesel, jet fuel, and asphalt—as well as chemical manufacturing facilities, and even steam boilers. It is sometimes referred to as a “methane reaction,” as methane molecules are generated during the interaction of carbon and hydrogen atoms that are diffused into the steel at high temperatures. The (highly flammable) methane is trapped and accumulates over time, initially causing tiny cracks, which grow larger over time, eventually connecting.  The crack in the Tesoro pressure vessel that ruptured was 48 inches long, and more than one-third of the way through its 1-inch-thick shell—a ticking time bomb. When the temperature jumped during the startup of the offline vessels, its condition was too weak to withstand the stress. Notably, the shell of the middle vessel of the set undergoing restart was also found to contain HTHA damage along the high-stress weld regions. 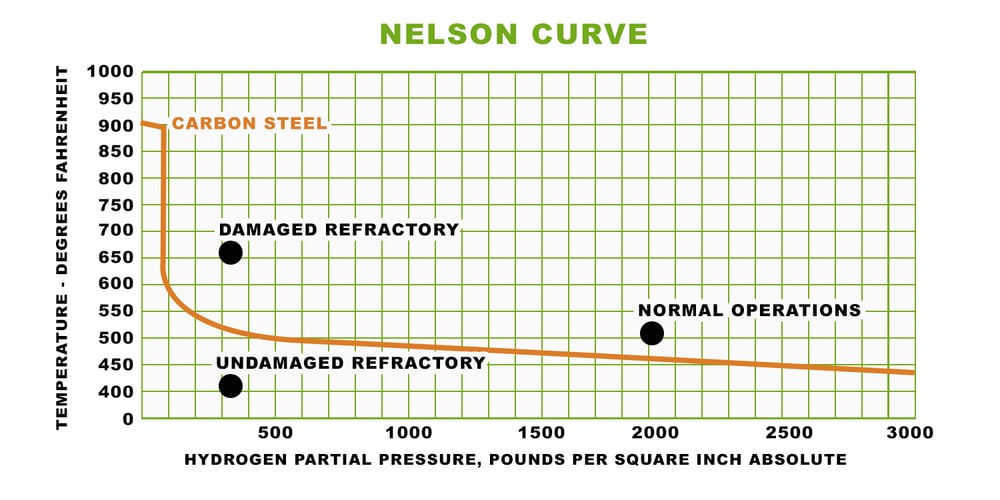 For assets at risk for HTHA, the industry standard for carbon steel was traditionally the American Petroleum Institute’s “u,” data modeling that predicts asset susceptibility to HTHA damage. Its methodology takes into account process temperature, pressure contributed by hydrogen, and the type of materials used in equipment composition. In short, those that operate below the Nelson Curve were not previously considered to be at risk for HTHA. However, following the Tesoro incident, the CSB concluded that the carbon steel Nelson Curve isn’t reliable to predict or prevent asset failure, and has since identified many other incidents of HTHA in equipment thought to be operating below the curve. The underlying factor in the Tesoro case, according to the CSB, and likely many others, was that the carbon steel Nelson Curve did not use actual process conditions to predict the risk of HTHA.

We know that HTHA can occur in high-stress areas, such as near the weld regions of heat exchangers. While it is recommended that safer, more robust materials such as high chromium steels should be used to safeguard against HTHA, there is ever-improving detectability. Several advanced inspection techniques available today are capable of gathering extremely detailed data to discover various stages of HTHA, thus allowing operators to make informed and timely decisions about component repair or replacement.

Circling back to the aforementioned audit that was performed one year prior to the Tesoro incident, the CSB reported that significant emphasis was placed on verifying the existence of basic protocols for conducting thickness monitoring, with no mention of HTHA, corrosion studies or failure mechanisms, and no references to relevant or possible damage mechanisms that could be present. The report also notes the difficult nature of inspecting for HTHA, “because the damage might not be detected; it can be microscopic and may be present only in small, localized areas of equipment…equipment must already be damaged by HTHA for equipment inspection to identify HTHA. Successful identification of HTHA is highly dependent on the specific techniques employed and the skill of the inspector, and there are few inspectors who have this expertise.”

Since the CSB issued the report in 2014, technology has advanced dramatically. Gecko Robotics not only has an industry leading HTHA expert on its team but offers several different NDT inspection techniques for detection. These include, but are not limited to, the following, often used in combination. 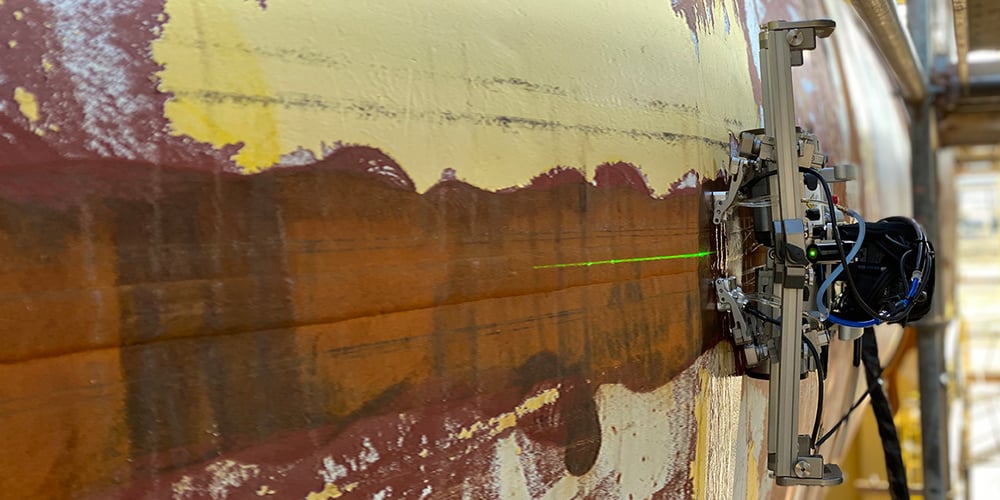 Time of Flight Diffraction (TOFD) TOFD involves the use of ultrasonic probes on opposing sides of a weld to detect flaws. It measures the ultrasonic pulse’s time of flight—how long it takes for an emitted sound wave to reach a surface and return—of the ultrasonic pulse to determine the location and size of a reflector or crack. 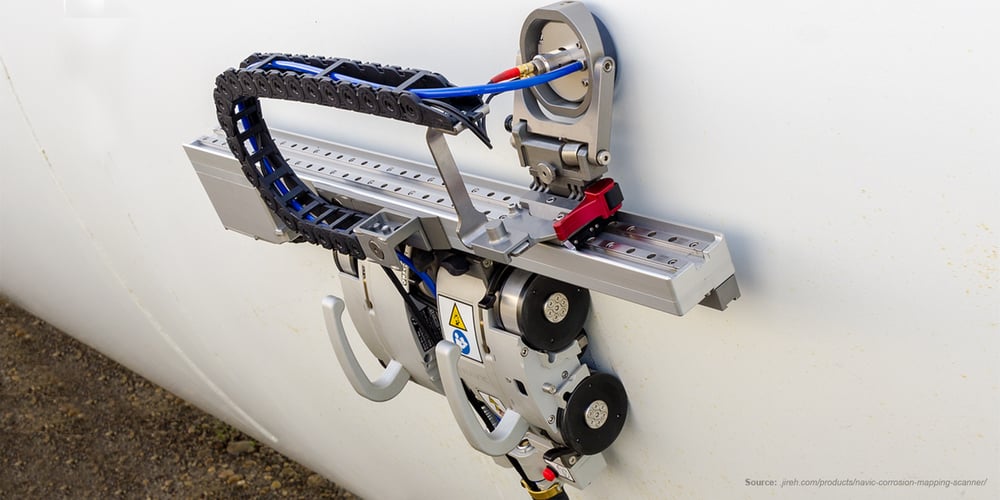 Phased Array Ultrasonic Testing (PAUT) Often used in conjunction with TOFD, PAUT uses probes composed of several elements and a range of angles synthesized by pulse control. The probes are programmed to pulse individually at calculated times, with pulses emitted at different angles. This enables them to be sized, swept, and steered to unveil difficult-to-detect cracks or other flaws in an asset or obtain thickness measurements. 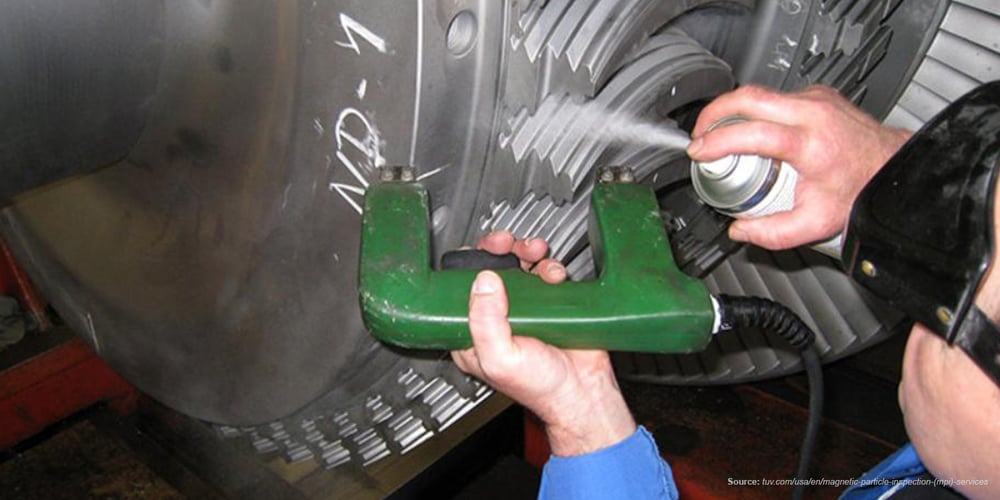 Be sure to watch for our next blog, which will explore the various inspection methods and technologies that can be used to inspect and detect HTHA!

Our most advanced robot to-date, is equipped to find and collect the critical inspection data you need to make preventative and predictive maintenance decisions. It is a system that is creative, yet disciplined, rugged, yet pliable - in a word flexible. 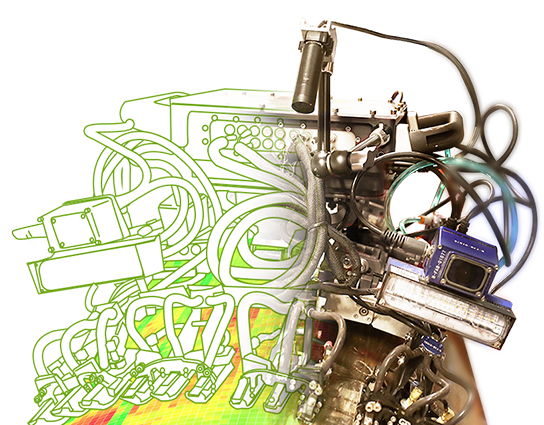