What is Robotics as a Service (RaaS)?

As companies seek to optimize and automate operations, a new era of robotics-based technologies is stepping up to meet the challenge. However, despite plenty of potential benefits and cutting-edge capabilities, purchasing automated robots to perform one or more specific tasks requires an upfront capital cost that is often budget prohibitive. This is particularly true for small to medium-sized companies, especially when coupling the robot expenditure with the need for personnel experienced in robotics.

To overcome this hurdle, companies in a vast range of industries have begun utilizing Robotics as a Service (RaaS) as a cost-effective and high-value option for integrating robots into their daily operations.

The Basics of RaaS

In general terms, Robotics as a Service (RaaS) is a financial model for the purchase and use of a robot to automate tasks either through a subscription or one-off service capacity. According to the Association for Advancing Automation, RaaS first emerged in 2013 but is gaining popularity in the industrial sectors as companies recognize the benefits of robots working alongside humans.

RaaS is similar to the concept of Software as a Service (SaaS), where users subscribe to cloud-based software that stores, organizes, and analyzes data relevant to an asset or company. For example, in non-destructive testing (NDT), data collected through a robotic inspection can be accessible to owners/operators at any time through a SaaS platform. Unsurprisingly, RaaS and SaaS are often packaged together.

But before data is accessible through SaaS, RaaS provides the method of capturing the data or performing the desired task. With RaaS, customers immediately take advantage of the benefits robotics yield, such as increased productivity, safety, accuracy, and objectivity, without the capital and personnel investments required to buy and operate a robot of their own. Through a subscription-based model that varies by company, customers generally pay a recurring fee to “rent” the robot and company services, integrating the cost into their operating budgets. The RaaS company is responsible for the maintenance and performance of the robot and associated personnel. The goal is for a company to seamlessly integrate robots into their day-to-day operations without the need to manage their functionality, hardware, and software.

RaaS is being implemented in a wide range of industries and the market is expected to grow exponentially. ABI Research estimates that the installed base for RaaS will grow from 4,442 units in 2016 to 1.3 million in 2026, generating $34 billion in revenue.

As RaaS continues to grow in popularity, so too are the range of robotic applications. Here are a few examples of RaaS in various industries. 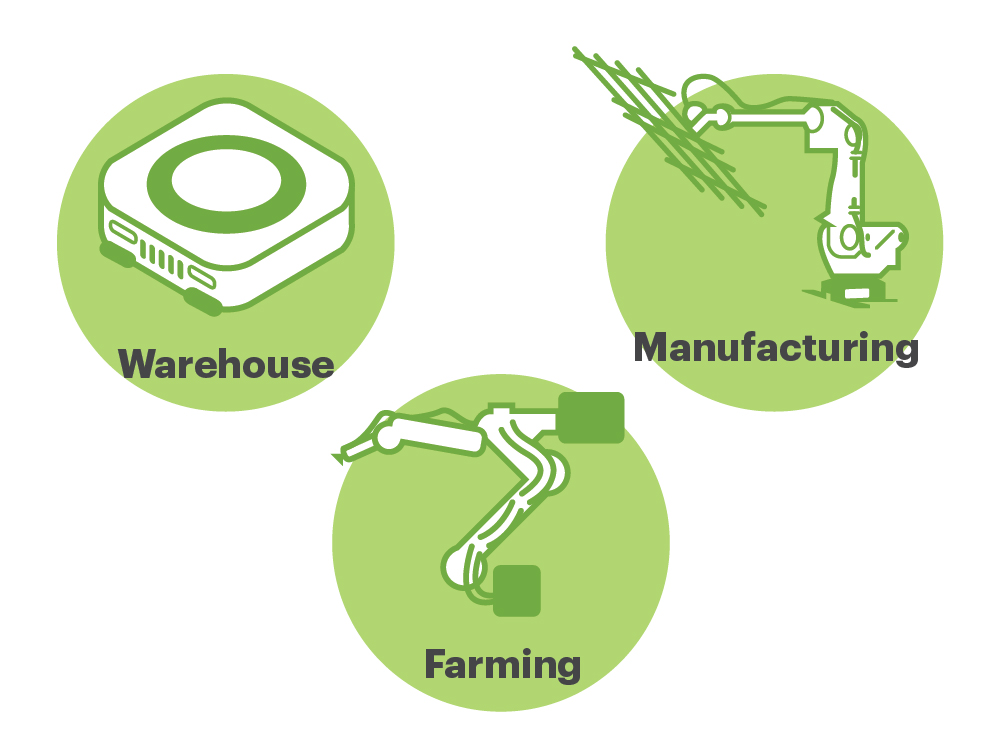 Intralogistics & Warehouse: These sectors are increasingly using intelligent, automated robots along with software to maximize efficiency. The robots are specially designed to lift, haul, or tow heavy pallets of goods or bulk containers from one area to another, or to find and retrieve inventory to fulfill orders. RaaS is being used to streamline warehouse operations, largely reducing labor and labor intensity, all while finding, capturing, and tracking crucial serial data through proprietary software. One benefit of RaaS contracts for intralogistics and warehouses is the opportunity to increase the number of robots on-site during peak business periods such as the holiday shopping season.

Manufacturing: RaaS is becoming more common in factories, performing repetitive tasks along assembly and production lines. For example, a robotic arm can load or unload items on a conveyor belt, or grip, mix, pick, or place items during different stages of production. Another application is using robots to test products for functionality or quality control in the same way, over and over, whether it be pushing a button or pulling a cord.

Surveillance & Security: Mobile security robots are being used to perform the duties of an on-site guard, including patrolling the premises, collecting visual data, and detecting anything from unauthorized personnel to unsecured doors. Some security robots possess advanced capabilities for license plate recognition, thermal package detection, facial recognition, and more. These robots are usually controlled by a human, therefore multiple security robots at different locations can be monitored by one person. Robots as the first line of defense can provide safety for the guards in the event of an intrusion or other security breach. 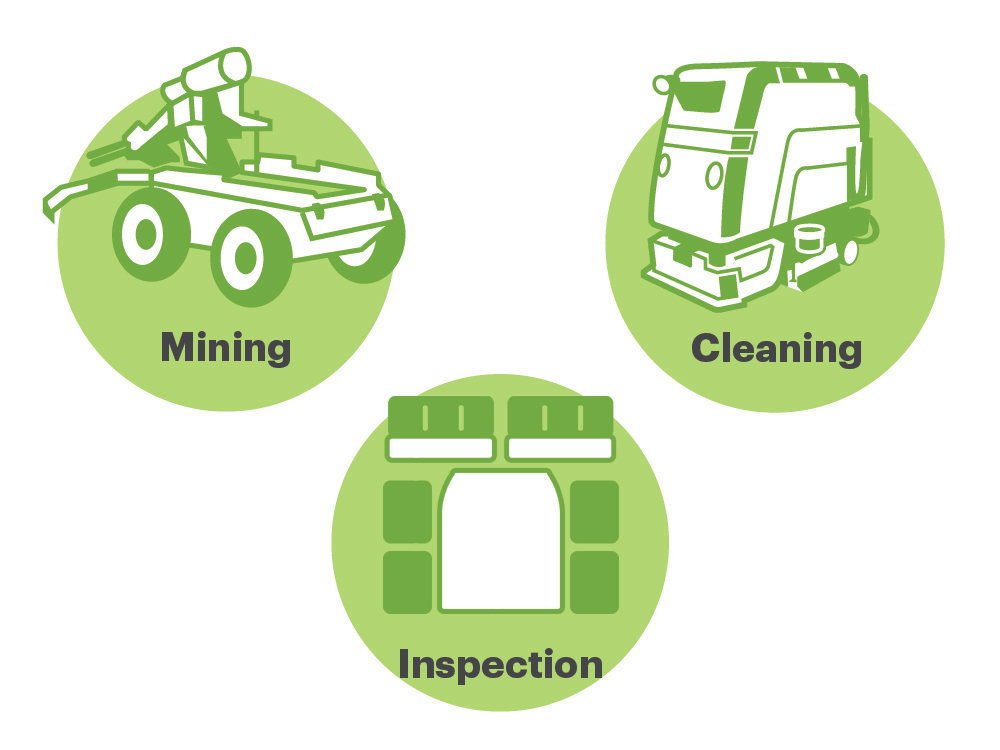 Farming & Agriculture: RaaS can be particularly useful for farmers who don’t require the use of robotics during the winter and can take advantage of seasonal contracts. Drones, or unmanned aerial vehicles, are being used on farms to increase productivity, profitability, and protect the environment. When combined with software, data collected from drones can be used to monitor crop health, plant height and density, assess water needs, perform soil analysis, and more. Other “agribots” are being used on farms to perform traditional gardening tasks, herd livestock, and monitor greenhouse gas emissions.

Field Applications: Field robots are programmed to respond to ever-changing and potentially unsafe environments, a far cry from robots used in manufacturing that repeat the same task. As defined by the Association for Advancing Automation, these robots are “adaptive, responsive robots that work under variable conditions, sometimes in unexplored territory, and sometimes performing tasks that are too laborious or dangerous for humans.” Because of this, field robots are increasingly utilized in hazardous environments, including mining, drilling, explosive testing, and even space exploration to avoid or limit human exposure.

Cleaning: In cleaning applications, building owners or cleaning companies might enter a contract that charges by the hour, week, or month. Market offerings for these specialized robots currently include crawler-type robots for windows or building exteriors or for indoor cleaning tasks including scrubbing, mopping, vacuuming, and more. In industrial settings, cleaning robots are used to clean equipment prior to inspections. One important benefit of cleaning robots is safety, by either minimizing human exposure to high elevations or to the hazards of confined space entry.

Industrial Inspections: For the sake of relevancy, this section will explain the advantages of using robots for NDT in the oil and gas, power, pulp and paper, and chemical industries. Inspection robots utilize NDT techniques such as ultrasonic testing to measure wall loss and identify, locate, and even quantify damage mechanisms, including corrosion, cracking, and weld defects. It is not the robots alone that yield the huge strides in personnel safety, inspection speed, data accuracy, asset reliability, and preventative maintenance, but also the paired software that organizes and analyzes the inspection data to allow operators to make the most informed decisions regarding a piece of equipment. Expenditure for RaaS and SaaS in industrial settings is offset by the cost-savings in personnel time, access, loss in productivity, and safety.

In conclusion, the demand for RaaS is increasing because of the benefits of high-tech robotics, including efficiency, safety, and accuracy, for optimizing daily tasks. Industries from farming to field applications to industrial inspections are utilizing robots to collect data, and when coupled with software, these companies have unprecedented insight into operations and productivity without the need for capital investment.

Robotics as a Service (RaaS)